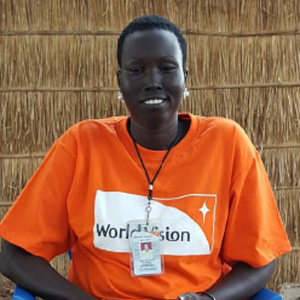 More than 1.6 million people are internally displaced across South Sudan, in addition to 786,000 people who have fled to neighbouring countries since December 2013.52 Most displaced children have not received any formal education since December 2013 and many have been exposed to numerous forms of violence such as recruitment by armed groups, acute physical violence and a high incidence of sexual and gender-based violence.

World Vision puts a strong emphasis on working with communities to reinforce the value of women and men, girls and boys, and the significance of their contribution to their families, communities and society in all settings, including emergencies and fragile contexts, to build peaceful and sustainable societies based on gender equality. In order to do so, child well-being, education and protection is at the heart of every endeavour.

In South Sudan, World Vision has been delivering a programme funded by Irish Aid which illustrates how it is possible to tackle the two main causes of GBV: gender inequality and discrimination through protection and education for internally displaced children and their respective families and communities implemented with two underlying principles: promoting gender equality and GBV prevention through education for boys, girls, women and men.

Overall, the programme believes in and promotes the idea that IDPs, particularly women and girls, are the active and effective agents of change capable of contributing towards the betterment of the community they live in. Education and Protection programmes that promote gender equality, protection and prevention of GBV at their core are vital for helping women and girls in fragile communities unlock their potential in creating sustainable and peaceful environments.

This outlook led to the formation of a number of key initiatives in three IDP camps and their host communities in Melut County including:

The involvement of religious leaders to be agents of social change. Though religious leaders were not targeted directly in this particular programme, the World Vision team recognised their roles as valuable members of the community and they were engaged through members of parent teacher associations. They actively worked to disseminate messages on child marriage and the importance of girls’ education during Sunday Church services.

“After parents saw me and other female colleagues who are working with different agencies receiving good money, they are now supporting their daughters to go to school.”

Teressa, is 24 years old and has been displaced twice in her life as a result of conflict in South Sudan. When she first entered the camp in Melut county, she didn’t see many opportunities for education and thought that there was widespread gender inequality at the camp, with most men spending their days idle while women were responsibility for collecting firewood, cooking, cleaning and looking after children. In August 2015, she applied to be a teacher at the Irish Aid supported education project and started working as a volunteer assistant teacher. After three months, she became a teacher in one of the Early Child Development centres. Since April 2016, Teressa has been working with World Vision South Sudan as a Food Monitor and is now happy to be working in the area of nutrition and supporting her son.