A leading organisation working to eradicate female genital mutilation (FGM) has joined the Irish Consortium on Gender Based Violence (ICGBV).

The Ifrah Foundation was founded in 2010 by Ifrah Ahmed, who was born in Somalia and is now an Irish citizen. She is one of the world’s top international female genital mutilation/cutting (FGM/C) eradication advocates and activists. Ifrah has received multiple awards for her work and campaigning to bring an end to this practice around the world.

The Ifrah Foundation has joined the ICGBV which is an alliance of Irish human rights, humanitarian and development organisations, Irish Aid and the Irish Defence Forces.

The Consortium was formed to address the high levels of sexual violence that was being perpetrated in international conflict and crisis situations in 2005. Together members work to increase knowledge and understanding of violence against women and girls.

The consortium members strive to ensure high quality programming and policy responses across the humanitarian and development contexts in which they work and to build leadership to support their shared vision of a world free from gender-based violence. 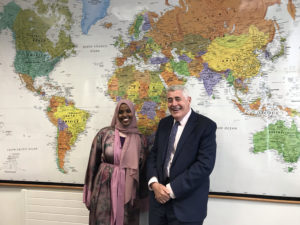 Welcoming the Ifrah Foundation, ICGBV Chairperson, Concern Worldwide Chief Executive Dominic MacSorley, said the Foundation had shone a light on the issue of female genital mutilation, a pervasive but preventable form of gender based violence. “We look forward to working with the Ifrah Foundation in the coming years on the amazing work that they are doing to end the practice of FGM/C worldwide,” he said

The Ifrah Foundation is a registered charity in Ireland and recently appointed Leonie Kerins as it’s executive director. It has been active in Somalia since 2013, where it is also a registered Civil Society Organisation. Ifrah Ahmed, founder of both entities, leads the programme activities there on behalf the Foundation’s many international funding partners and also acts as gender advisor to the Government of Somalia.

Ifrah Ahmed said: “We are delighted to join the consortium which brings together a wealth of experience in the field of gender based violence. Working together with the members of the consortium, we are looking forward to learning from them and forging stronger partnerships to support our work on the ground”

For further information about the Ifrah Foundation visit www.ifrahfoundation.org

For media queries contact Abby Ryan, Coordinator, Irish Consortium on Gender Based Violence, at 01 41777702 or abby.ryan@gbv.ie

Notes to the editor:

The full membership of the ICGBV is:

Department of Foreign Affairs and Trade